Heritage Lottery Funding has enabled Chichester Festival Theatre to carry out a Heritage Learning and Participation project over three years, exploring activities such as workshops, working with schools, exhibitions, archiving and volunteer training in order to increase community collaboration and engagement with the Theatre, ultimately enhancing the awareness of its exciting Heritage. As part of this project, the Theatre ran two Family art workshops, in partnership with PACSO (Parents and Carers Support Organisation), My role as a volunteer was to research, collect data and record observations, in order to evaluate how valuable the workshops were in terms of engagement and learning for its participants and the other volunteers involved. This then enabled me to create an evaluative report and blog.

These workshops took place in the school hall of Central Church of England School, a local primary school and Pass It On project partner. Families arrived on the day to find an imitation of Chichester Festival Theatre’s thrust stage, complete with a set and props. This immediately integrated the group. As they excitedly merged as an audience, they were also eased into the notion of theatre and the theme of the day. Representing the stage was a fantastic alternative to the real deal! The group were invited to rummage through a tattered suitcase and delve into the world of theatre, discovering symbolistic props and intriguing objects. This ignited inspiration and created a buzz to get hands dirty and start making art. The ‘heritage’ and ‘art’ elements worked hand in hand; relaying throughout the day. This enabled progression- providing the opportunity for enriched learning.  As the day proceeded, from Chichester Festival Theatre’s story, to sun prints (see the above photo) – to print making, it was lovely to see people come out of their shell and not only immerse within the art, but with other families and staff; it was rewarding knowing the workshop could facilitate friendships. 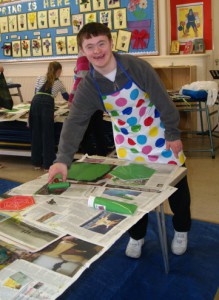 The layout of the workshop meant people were not obliged to stick to one activity; there was freedom within a structured workshop and the flexibility for engagement as and when, which was perfect for those with shorter attention spans – adults were amazed that their child was able to engage for such long periods of time, which wasn’t usually the norm! The groups were able to have some ‘family time’ where they could sit down and have the chance to work together, as equals, supported by helpful staff. Although there were a few disturbances with some children closely tailed by breathless parents (also perfectly acceptable!), the general ambiance was that the adults could spend a relaxing and therapeutic time with their children, irrespective of disability, and the children could be proud to journey through the workshop with the support and praise of their adults.