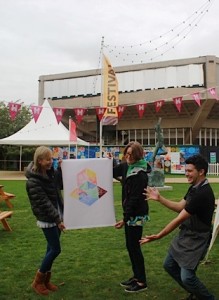 This year as part of the annual Chichester Festival Theatre Heritage Open Day, members of the public had the opportunity to go on hard hat tours of the current renovation works on the Theatre. This was a rare chance for people to see inside the incredible architecture of the Festival Theatre. Additionally it was also a chance to see the work being done to enhance the Theatres iconic and prominent hexagon shape, around which my art workshop, also part of this year’s Heritage Open Day, was based.

Being a fine art graduate from Chichester University and having run workshops within social care, this opportunity was perfect for me, combining two areas of interest and work.

The workshop focussed on printmaking and was run on a drop in basis with groups working collaboratively towards a final artwork. Participants were given the chance to each create a print plate (a design drawn into a polystyrene board to be printed from). Their design could contain a memory from a production they’d seen at Chichester, be an abstract influenced by the architectural images of the Theatre or anything they felt inspired by. When the plates were completed, I then took the groups through the process of inking up and printing from them by rolling ink over the surface of the print plate and then placing it on the paper. 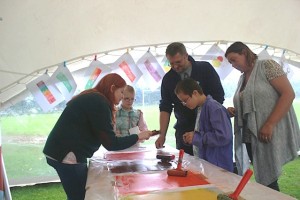 As the groups followed this process they needed to piece their individual print plates together on a ready-made registration plate. Through this process, the groups would see that together they had created the Hexagon that represents the original design of the Festival Theatre! For the second print I gave those in the workshop extra plates, which they could add to the registration plate in order to create the Theatre with its new extensions. Much enjoyment was taken from being asked to work collaboratively with other people to create a larger piece of artwork.

Unfortunately due to the poor weather on the day, we didn’t have as many people as I hoped coming to the workshop, however I immensely enjoyed working with those who braved the cold windy day joining us in the small marquee tents in the shadow of the Theatre. Many beautiful works were made that afternoon, each strong in their own right.